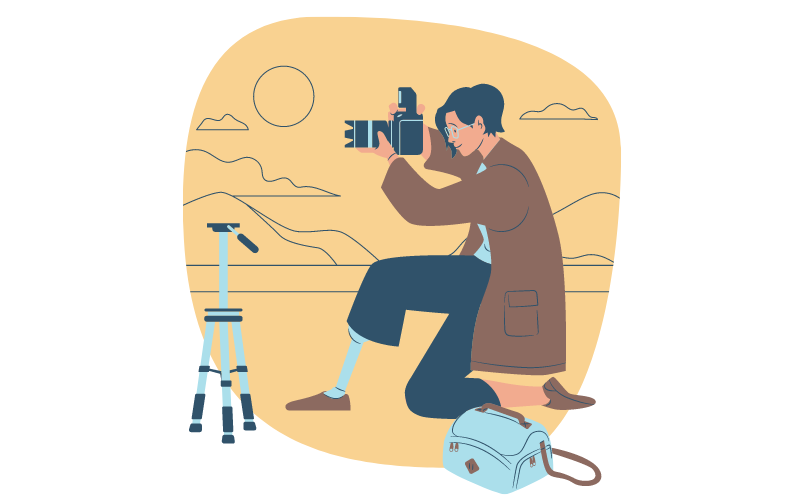 Since Joseph Nicéphore Niépce invented the photographic camera in 1816, photography has been a powerful tool for documenting our lives and our world.

From Charlie’s Cole’s image of a lone protestor staring down a line of tanks in Tiananmen Square to Ansel Adams’s black-and-whites of the American West, still photographs create strong emotional connections to people, events, and places we may never experience. As Dorothea Lange put it: “Photography takes an instant out of time, altering life by holding it still.”

But the photographers who create those images face an increasingly challenging economic landscape—and it’s made more difficult by the widespread piracy of their work.

When we think of piracy, we usually think in terms of big numbers. For example, the film industry estimates that pirated films get about 230 billion views per year. The music industry estimates its annual losses to piracy at $2.7 billion. Those numbers help to quantify the problem, but they only tell half the story—and it’s not the more compelling half.

Individual artists, such as photographers, earn a living through royalty payments made by those who source, value and license their intellectual property. They rely on licensing income to support themselves and invest in the equipment they need to do their work.

Equipment alone can be expensive. Photography requires an extensive kit, including the camera body, lenses, and lighting equipment, as well as access to a computer, digital storage, and advanced editing tools. That can easily cost tens of thousands of dollars, and because our expectations for imagery are always evolving with what we see, professional photographers have to keep that kit updated.

The profession can also be dangerous, especially for photojournalists. Reuters photographer Danish Siddiqui was killed while covering events in Afghanistan in 2021. Margarito Martinez Esquivel was shot outside his home in Tijuana this year. Pulitzer prize winner Maksim Levin was killed covering the war in Ukraine. Security to protect against the danger photojournalists face in Ukraine today can cost news agencies hundreds of thousands of dollars per month—while unrepresented freelancers have to carry the cost of insurance themselves.

To ensure that enough people see their work, freelancers like Canadian nature, macro, and landscape photographer Don Komarechka use websites to promote themselves—and tag their photos so they’ll be discoverable through Google searches.

“I strive to build the biggest audience for my work, which then creates commissioned work, licensing, physical art and book sales, and even workshop registrations. Showing up in search results and social media is critically important to business growth, but many people ignorant of copyright laws will incorrectly assume that they can use my work for free,” says Dan. “There are no geopolitical limitations to this misunderstanding of copyright; my work is infringed around the world and defending my copyright is essential.”

The moment photographers and other visual artists put an image on the web it’s vulnerable to piracy. For publishers, bloggers, as well as web and graphic designers, it’s just too easy to right-click on an image and download a digital file. Sadly, they rarely take the time to make sure they’ve cleared the rights of the images they’re using. Across media, analysts suggest that artists and media companies lose at least 10% of their revenue to piracy.

Given that the average photojournalist makes around $60,000 per year, that’s an enormous individual economic impact. Using a photo without paying the royalty is the equivalent of taking money out of a coffee barista’s tip jar—if the barista needed to use those tips to pay for the espresso machine and everything needed to operate it.

Some companies, like PicRights.com, work with photographers to discover misuse on the web and request payment from publishers who have used their work without paying for it.

But despite the efforts of monitoring, reporting and enforcement services like PicRights.com and visual licensors like Getty Images and Adobe Stock, piracy continues to be a problem—taking money out of photographers’ pockets and disrupting the economics of a profession that for two hundred years has opened our eyes to the world.